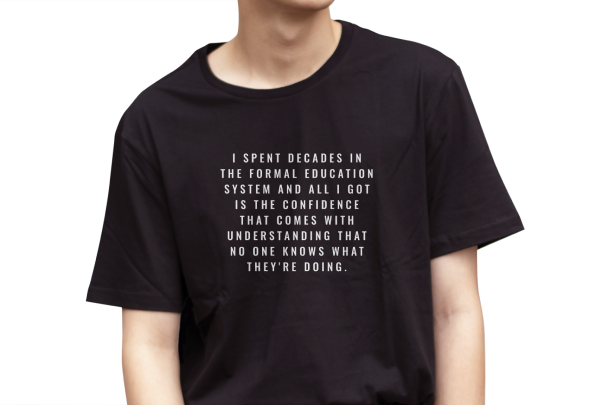 You know the “And All I Got Was This Lousy T-Shirt” meme right? My personal variant is:

I spent decades in the formal education system and all I got is the confidence that comes with understanding that no one knows what they’re doing.

Not very catchy, I know. But I’m serious.

One of the most harmful beliefs is that everyone who’s doing important stuff is able to do it because they know something you don’t. That’s simply completely false. There are no magic bullets and everyone’s making it up as they go.

Now the obvious problem is that you can’t simply read a statement like this and start to believe it. The human mind doesn’t work that way.

For example, you’ve probably heard from many people that you don’t really learn anything important during an MBA. Instead, the real value lies in the connections you make with fellow students and the piece of paper you get at the end.

But still, it’s hard to shake off the feeling that there’s value in the content that’s being taught.

Even if people can’t remember all the details, they’ve certainly picked up some strategies that they’re now using subconsciously. And surely, it’s precisely these strategies that make people like Elon Musk or Jeff Bezos so successful.

Although both don’t have an MBA, getting one is just a fast-track to getting on their level without having to figure out everything yourself, right?

To understand how widespread this belief is, just look at the sales numbers of books like “The ten-Day MBA”, “The Portable MBA”, or “The Personal MBA”.

I’d go as far as saying that the content you learn during an MBA is not only not useful but actually harmful.

The theory now is that “Cash Cows” should be milked, “Dogs” killed, and “Stars” get all the resources they need. (The “Question Marks” need to be treated on a case-by-case basis.)

While this sounds perfectly reasonable, there are so many problems with this matrix it’s hard to know where to begin:

I’m pretty sure that some people will read this and say “the product-portfolio matrix is completely outdated and everyone knows that it needs to be amended by X, Y, and Z.”

Yeah, I know that trick all too well.

In physics, we have Supersymmetry. Like the product portfolio matrix it seems like a smart idea until you start thinking about it. And each time, the predictions made using Supersymmetry turned out to be wrong, researchers who made their careers by coming up with these predictions simply modified their models a little bit.

It’s one of the oldest tricks. Whenever someone proves that you’re talking nonsense, you simply modify your theory a bit. And since there are infinitely many variations you can come up with and testing them in experiments takes a long time, you’ll always seem like the winner.

Now after this somewhat lengthy tangent, let’s get back to the main point I want to make:

The stuff you learn during a formal business degree is not useful (and possibly even harmful) and the only real learning is that no one knows what they’re doing and that there are no secrets.

I don’t have an MBA, so how can I say that? In fact, how can anyone get that kind of insight without wasting years hopping through meaningless hoops?

The very boring answer is books.

I’m definitely not suggesting that you should read the books that are used at business schools or the DIY MBA books mentioned above.

Instead, I’m talking about a specific type of book that leads to View Quakes.

Of course, everyone’s story is different, so it’s impossible to predict which book will cause a view quake for you. But at least for me, Management Myth by Matthew Stewart did the trick.

It contains lots of great stories and gives convincing answers to questions like: “How do so many who know so little make so much by telling other people how to do the jobs they are paid to know how to do?” “Why do people pursue expensive graduate degrees that have no demonstrable effect on their performance?” “Why do so many bad books of management advice sell so well?”

But most importantly it convinced me that I shouldn’t feel inferior because I don’t have a business degree. After reading it, I had internalized that even when it comes to “top management” no one knows what they’re doing and hence there’s no reason to feel like an imposter in the world of business.

When I started my Bootstrap MBA experiment, I thought that it would make sense to learn all the terminology and frameworks that are taught at business schools. Now I’m happy that I didn’t because I was too busy with my real-world experiments.

Before you go, let’s talk briefly about the other benefits of pursuing a formal degree.

To me, that seems like an obvious choice. In the past sixth months, I’ve made more meaningful connections using this strategy than in all the previous years I spent in the academic system combined.

A final often discussed benefit of formal education is “signalling”. A degree signals pretty clearly that you’re a specific kind of person. That you’re able to carry out meaningless tasks and follow orders. There’s no denying that this is an important factor and something you can’t get outside the academic system.

But I’d like to flip this argument on its head: If someone or a company cares about degrees, this clearly signals to me that they’re playing a game I don’t want to be part of. And that’s really all I have to say on that matter. (If you want to learn more, The Elephant in the Brain by Robin Hanson and Kevin Simler is a fantastic place to start.)

So what we’re ultimately left with is the “formal education gives you confidence” argument made at the beginning. And hopefully, I’ve successfully convinced you by now that you’re better off by reading an anti-imposter syndrome book instead.

PS: Unfortunately, it’s extremely hard to find these “anti-imposter-syndrome books”. In physics, what helped me in addition to my own experiences was the book Disciplined Minds by Jeff Schmidt. Another entertaining example is Laughing at Wall Street by Chris Camillo. If you know any other example, please let me know!