Most people don’t get into business to change the world. They simply want to provide value, be compensated for it, and do it on their own terms.

And you definitely don’t need to invent the next breakthrough in, say, battery technology to do this.

Understanding this is incredibly liberating.

Most beginners are paralyzed by the idea that they have to come up with a completely new kind of software, service, or product.

Or they start executing a totally unique idea only to find out just how incredibly hard it is to get something from zero to one.

It’s not just a matter of skill. You also need a lot of luck to be able to pull this off.

So it’s hardly surprising that if you study what seasoned entrepreneurs do, their approach is quite different.

Some of them got lucky in the past and were able to successfully execute a zero to one idea.

But back then, they were young. They were naive. Now they understand how big of a role luck played in their success.

So for their second or third venture, they’re using a different playbook. And most beginners would be better off using it as well.

The idea is to copy something that’s clearly working with some small but sufficiently significant changes.

Instead of trying to go from zero to one, we’re going from one to one plus epsilon, where epsilon represents our small change. 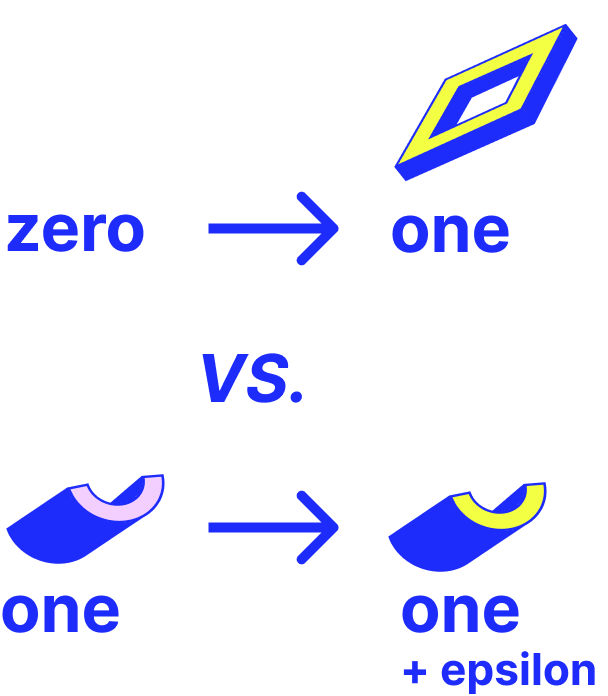 This is the most effective way to de-risk the launch of a new business.

Every successful business has a ton of moving parts. You have to decide what exactly gets included in your offer, how you package it, how you position it, how you price it, and most importantly how you’re going to acquire customers.

There are dozens of customer acquisition channels you can try and for each of them hundreds of variables you can experiment with. Getting just this part right is in itself a tough challenge. Now add all the other moving parts and we end up with a challenge that is borderline impossible.

There are billions of different combinations of the moving parts a business consists of and most of them don’t work.

That’s the problem with zero to one ideas. You have to be lucky enough to find a functioning combination before you run out of time and money.

The odds are definitely not in your favor, no matter how smart you are.

Compare this to the situation if we focus on “one plus epsilon ideas”. Here, we simply copy an existing and functioning machine and then focus on modifying one or maybe two of the moving parts.

Running experiments on multiple fronts is a recipe for a failure.

Finding a new winning combination is never trivial. One miracle is more than enough of a challenge. When you modify one of the parts in a functioning machine, chances are high that it will stop working or at least not work as well. But with some patience and hard work, there’s a good chance that we find a new combination that is different enough and works sufficiently well, if not better.

Now what does this really look like in practice?

For example, instead of trying to invent some new kind of cosmetic product, you could also focus on unlocking a new distribution channel for an existing one.

This is what Moiz Ali did with Native Deodorant (acquired Procter & Gamble for $100 million). Deodorants with natural ingredients have existed for a long time before Moiz entered the stage. The only thing he did different was to start selling it directly on the internet instead of going through the usual retail channels.

An even more extreme example is Nature Box (acquired by HUNGRY). Their original business model was they’d buy snacks at Whole Foods, put it into different sized packaging, and just ship it to your house. That’s all the innovation they needed to get their business off the ground.

Or take Alex West’s Cyberleads business ($300k in yearly revenue). It’s a carbon copy of Growth List and the only thing he changed was the positioning to make it laser-focused on agencies.

Look at Shaan Puri’s Milk Road newsletter (100k+ subscribers in less than 6 months). He simply copied the playbook used by The Hustle but switched the topic from business to crypto.

Another great example is Will Cannon’s Uplead ($8M in yearly revenue). His whole business idea was to copy ZoomInfo but make it more affordable.

This is an incredibly common pattern.

But of course, you will not be recognized as the next Elon Musk if you follow this approach. No one will call you a visionary and there won’t be a Netflix documentary about your life. But your chances of actually building a successful business are so much higher.

There’s another aspect worth mentioning which is especially relevant for first-time founders.

In virtually any other field it’s widely recognized that the best way to learn is through imitation. You don’t learn a new musical instrument by inventing new songs right away. Instead, you start by practicing other people’s songs. Then, after mastering and finding what you like, you develop your own style and songs using the patterns you noticed in copying others.

If you really want to pursue a moonshot, it’s probably smarter to do it after learning the ropes through imitation. Build a “one plus epsilon business” before you try to go from zero to one.

Another thing worth mentioning it that the “one plus epsilon” approach works just as well in all kinds of other games.

Sure you can try to come up with a totally novel headline that hooks readers and maximizes your chances of going viral. Or, you know, you can simply use a headline format that’s proven to work and tweak it a little bit.

For example, last week I wrote an essay that I thought was pretty good. But the headline above my draft was as awkward as it gets. It was something like “How I stopped getting fooled by pseudo-actionable advice”.

The chances that an essay with that headline, no matter how good the rest of the text is, is close to zero.

So luckily before I published it, I invested 10 minutes to go through my headline swipe file. This is really just a fancy word for a Notion database where I save and categorize great headlines.

Note that I didn’t steal Nat’s headline or anything. I got inspired by it and tailored to my own needs. This is what the Epsilon Method is all about, not blatantly copying other people’s work.

In this example, my epsilon was changing the word “Struggle” to “Insight”. It’s definitely a tiny change but given that the headline only consists of four words, it’s sufficienly large.

Nat’s essay was well-received by the Hacker News community so I posted mine there as well.

And this worked spectactuarly well. The essay went viral and was read by more than 50,000 the day I published it.

One flaw in this story is that I never posted the essay with the original awkward headline.

So I can’t know for sure how big of an impact the new headline had. I’m confident that it played an important role, but this is really just my opinion.

So here’s another similar story where I actucally did post the exact same content twice. The first time using a “zero to one attention hook”, the second time using the Epsilon Method.

In my first attempt, I tried to be clever and came up with the following thread hook from scratch: 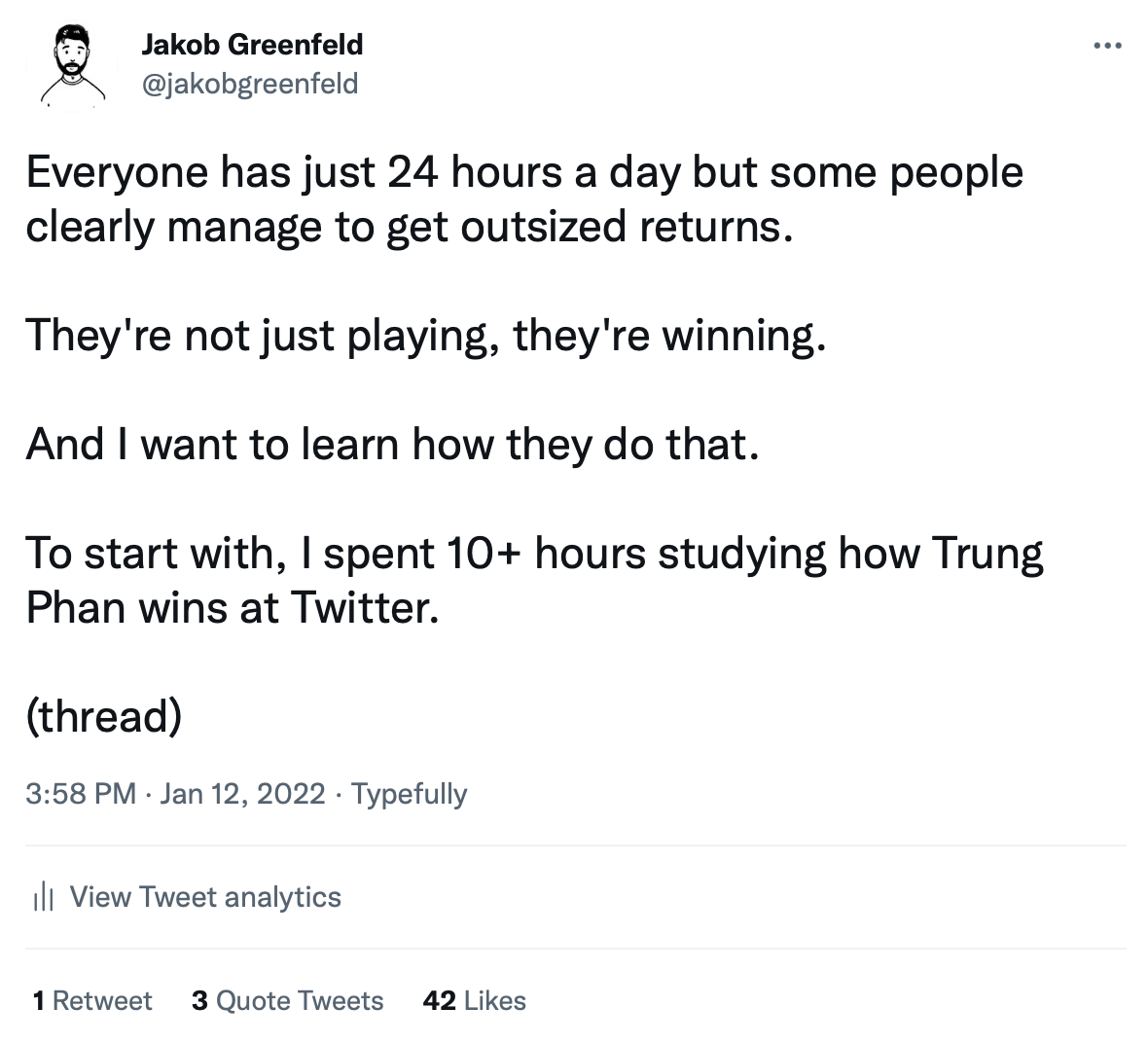 It flopped hard, earning just 42 likes and around 9,000 impressions.

Since I invested quite a lot of time into creating the thread, I decided to give it another shot. But this time, I used a proven format for my thread hook many people before me have used successfully. If you spend some time on Twitter, you’ll definitely recognize it. 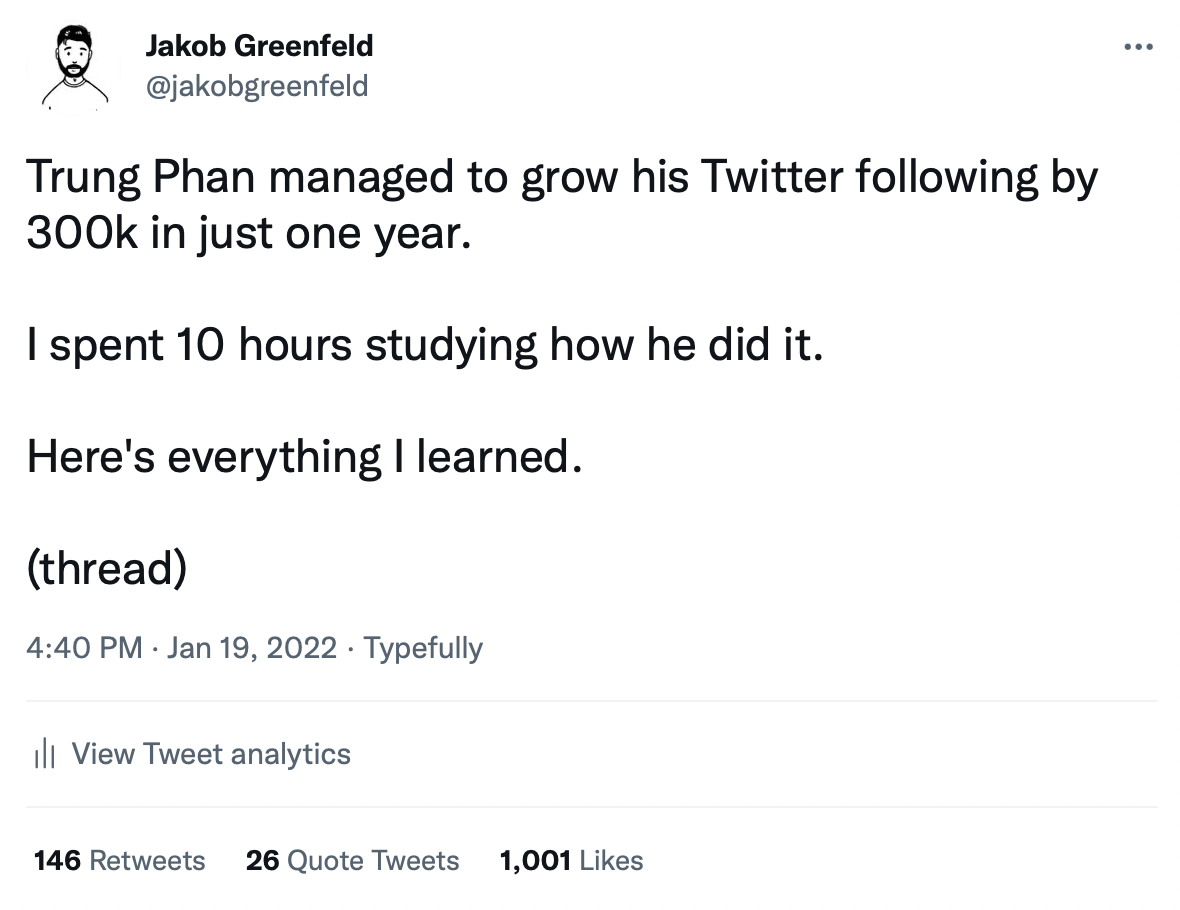 The result couldn’t have been more different. This time, the exact same content earned 1000 likes and more than 350,000 impressions. It was really the same thread. The only thing I changed was the hook (the first tweet).

Of course, once again this is not a proper scientific proof or anything. Other factors very well might have played a role.

But after doing these kinds of experiments in different contexts and seing many others succeed this way, I feel very confident to say that the Epsilon Method works and I’m now trying to use it wherever again.

For example, when I started my business newsletter two years ago, I tried to invent something completely new from scratch. Only now after far too many pivots I feel like I’m slowly coming closer to a format that works for me and the audience.

If I would start again today, I would simply use a newsletter format that’s proven to work in some other industry. I also wouldn’t start without studying and understanding their distribution and monetization methods first.

By trying to assemble all of these puzzle pieces from scratch, I unnecessarily played the newsletter game on maximum difficulty.

And of course, I want to test this idea.

Just two weeks ago I started a new newsletter. It’s called Newsletter Story and not just the name but also the format is heavily inspired by Pat Walls’ excellent Starter Story newsletter. The only difference is that instead of business owners, I’m interviewing newsletter writers. That’s my epsilon here.

Will it work? I have no idea. So far things look promising but there are never any guarantees when it comes to real-world experiments like this.

What I know for sure, however, is that this time I did everything I could to stack the odds in my favor.