What I learned from Trung Phan about growing a Twitter following

Trung Phan managed to grow his Twitter following by 300k in just one year.

I spent 10 hours studying how he did it.

Why study with Trung Phan’s approach?

I want to learn how to win and to quote Shaan Puri: “Winning is Trung.”

This always stuck with me and the data backs this up.

What fascinates me about Trung is that he didn’t simply get lucky.

He studied the Twitter algorithm carefully, then developed a strategy and executed it relentlessly.

So even though there can only be one Trung, there’s a lot to learn. Let’s start with his profile.

There’s not too much space on a Twitter profile you can customize but Trung uses it masterfully.

As a former screenwriter he has internalized the motto “show don’t tell” and signals his credibility using the cover image and bio. 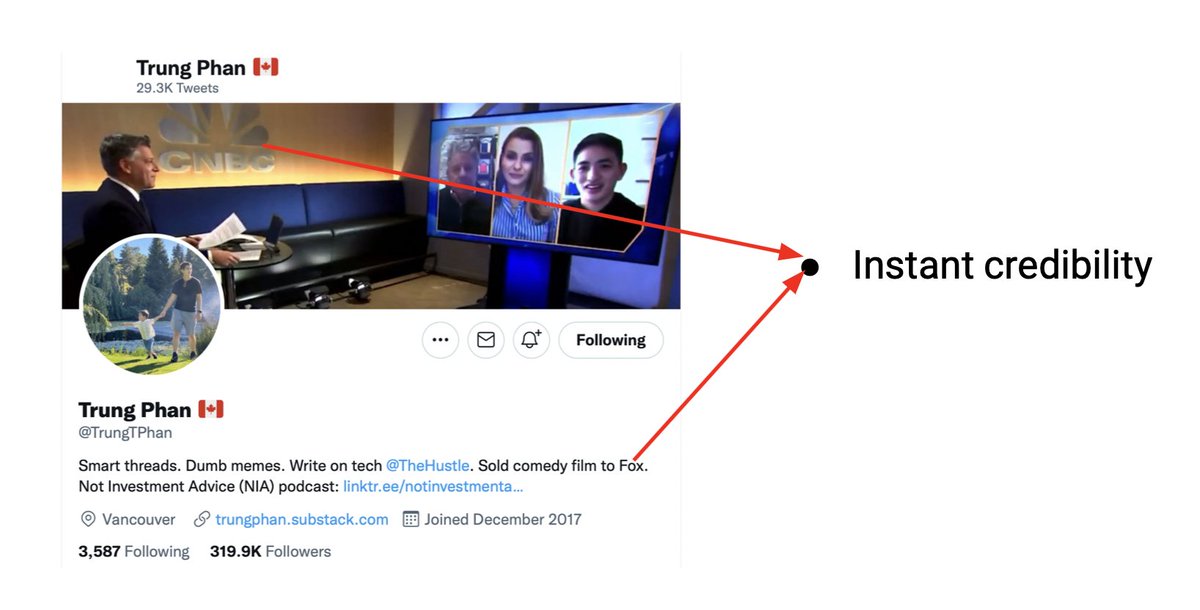 His profile pic and the first four words of his bio make him instantaneously likable.

He’s not some random internet character but a real human.

And he’s not taking himself too seriously. 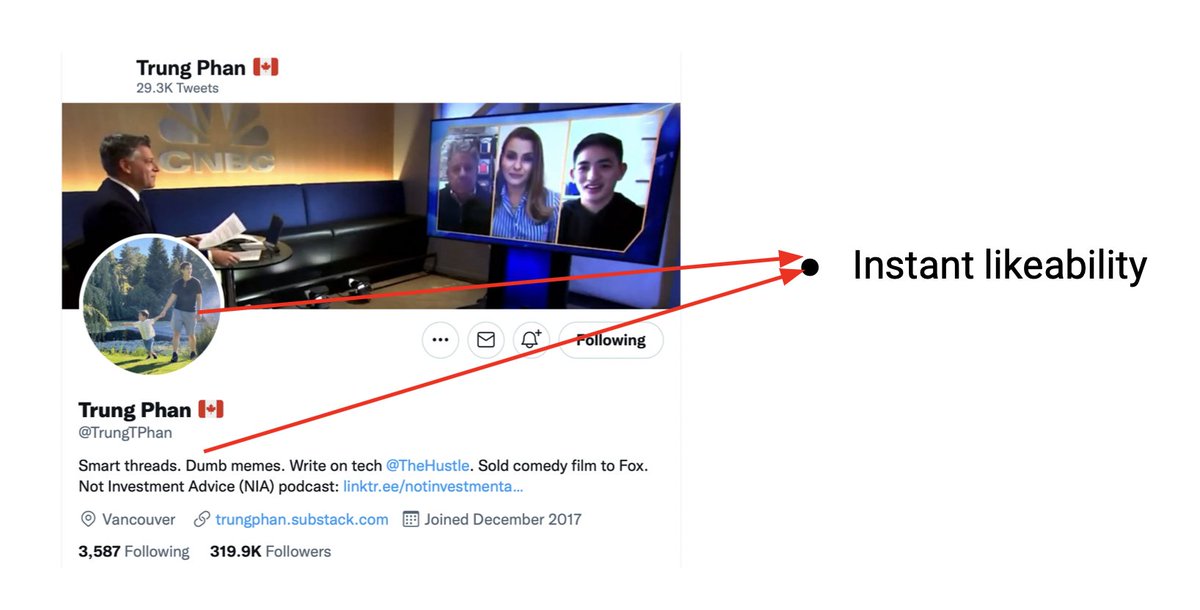 Another best-practice Trung uses is to leverage his profile to funnel visitors towards media that he fully owns. 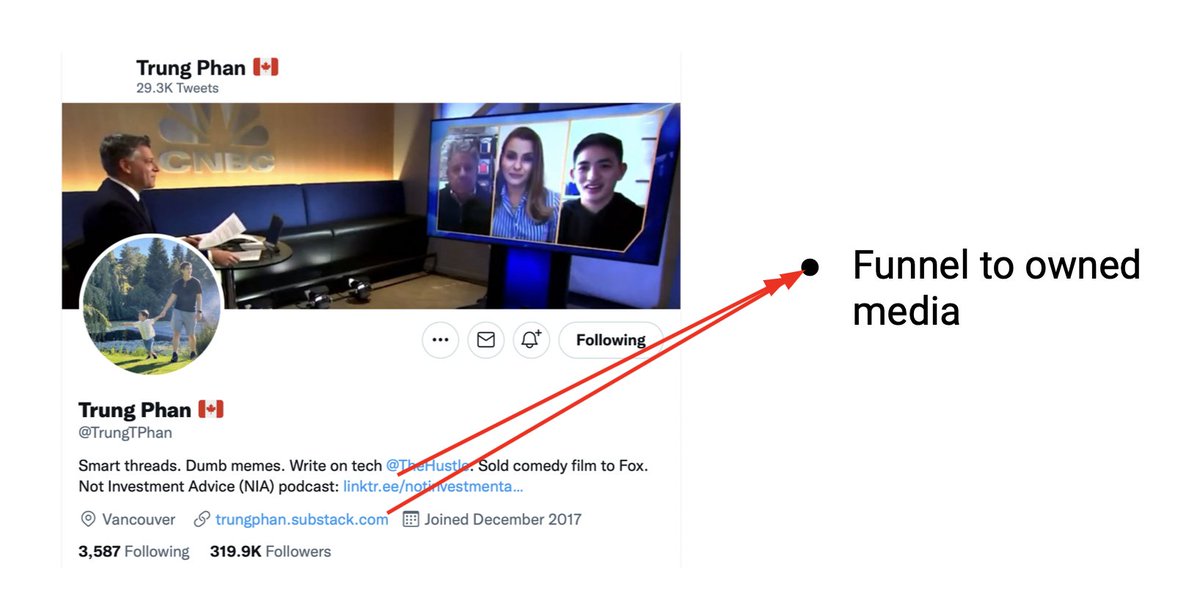 Okay now what can we learn from Trung about what to tweet?

In a recent newsletter issue he pointed out that the first four words of his bio summarize his approach: “Smart threads. Dumb memes”.

(We can also see nicely here that he studied and understands the Twitter algorithm.) 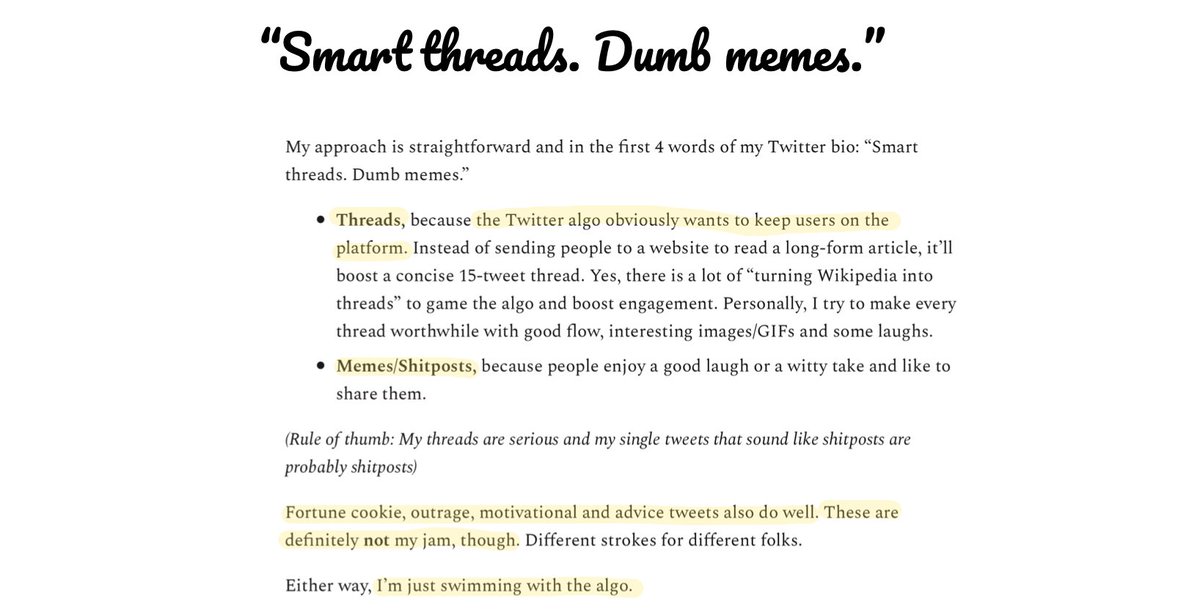 Here’s another way of looking at Trung’s strategy.

From the set of viral emotions he picked four that he now targets over and over again with his tweets and threads. 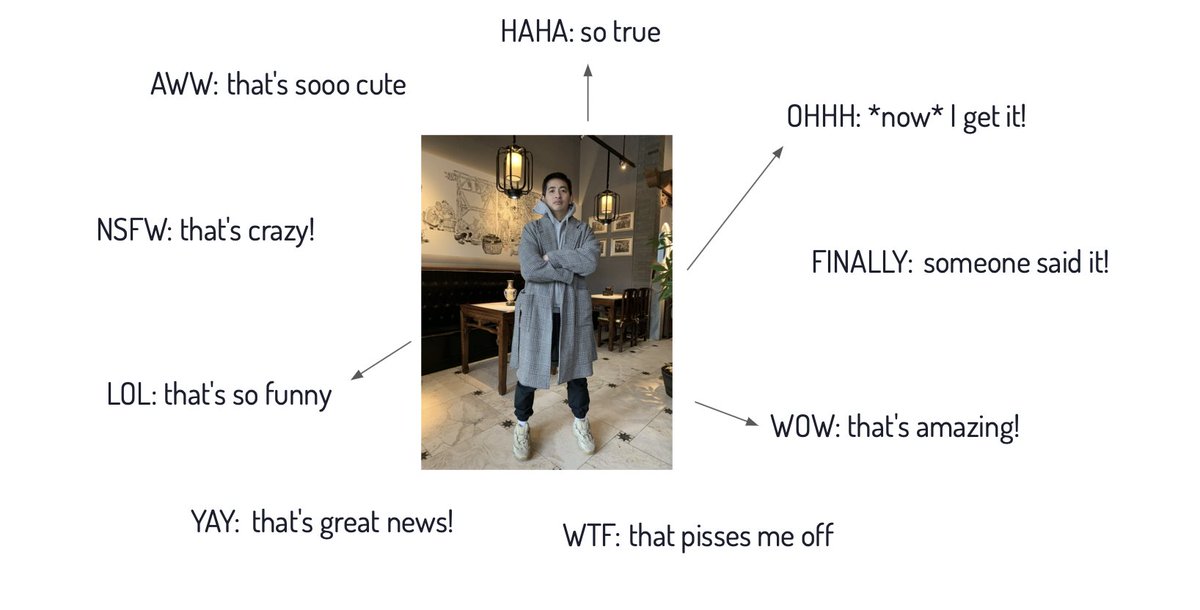 Let’s look at a few examples.

His favorite format to make his audience laugh is witty commentary.

Whenever the whole internet is talking about one thing, Trung quickly creates a funny meme that comments on the situation. 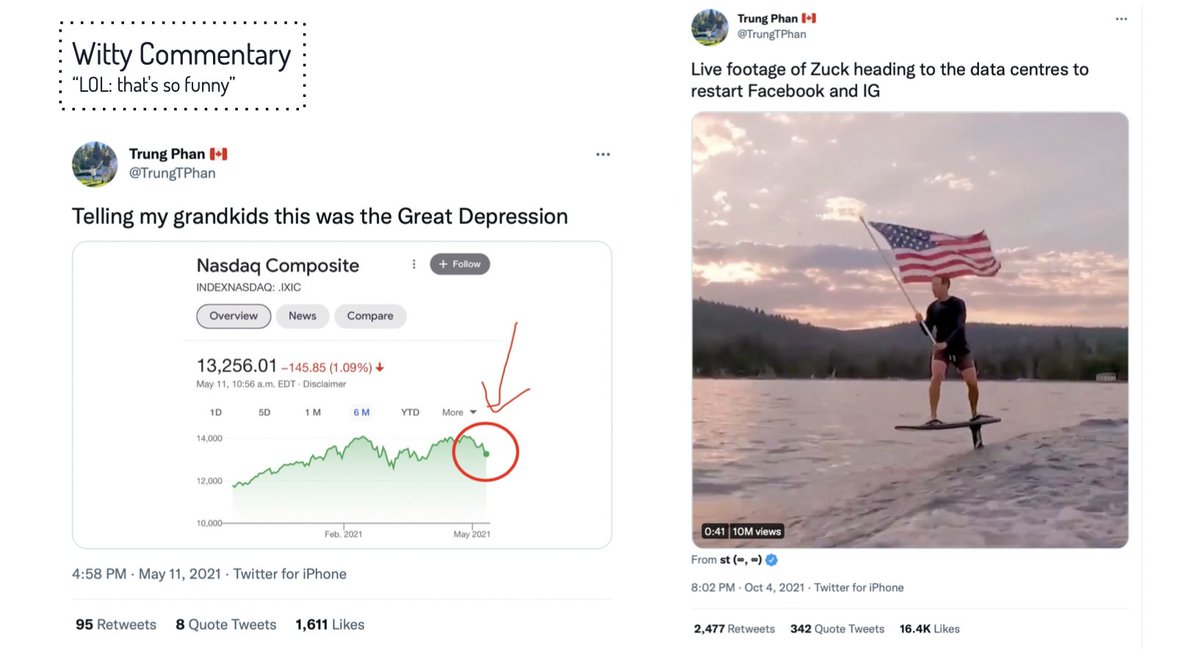 Another meme format he’s using over and over again are lessons with a twist.

He lists a bunch of facts and then concludes with a funny “lesson”. 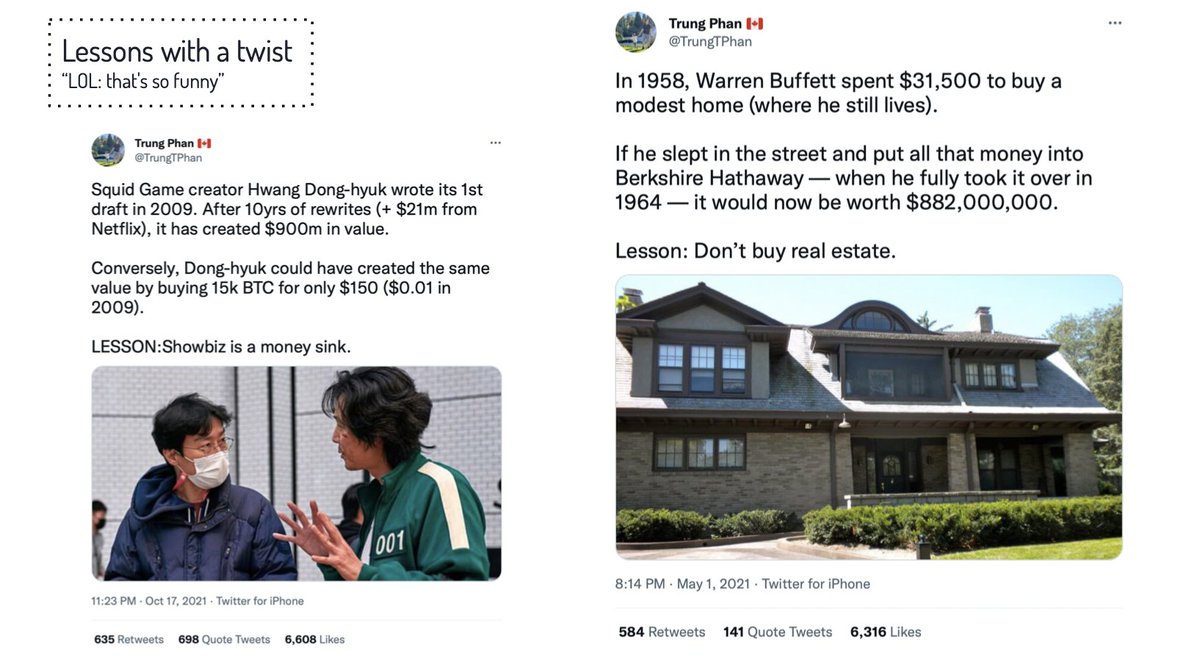 And then of course we have sh*tposts. 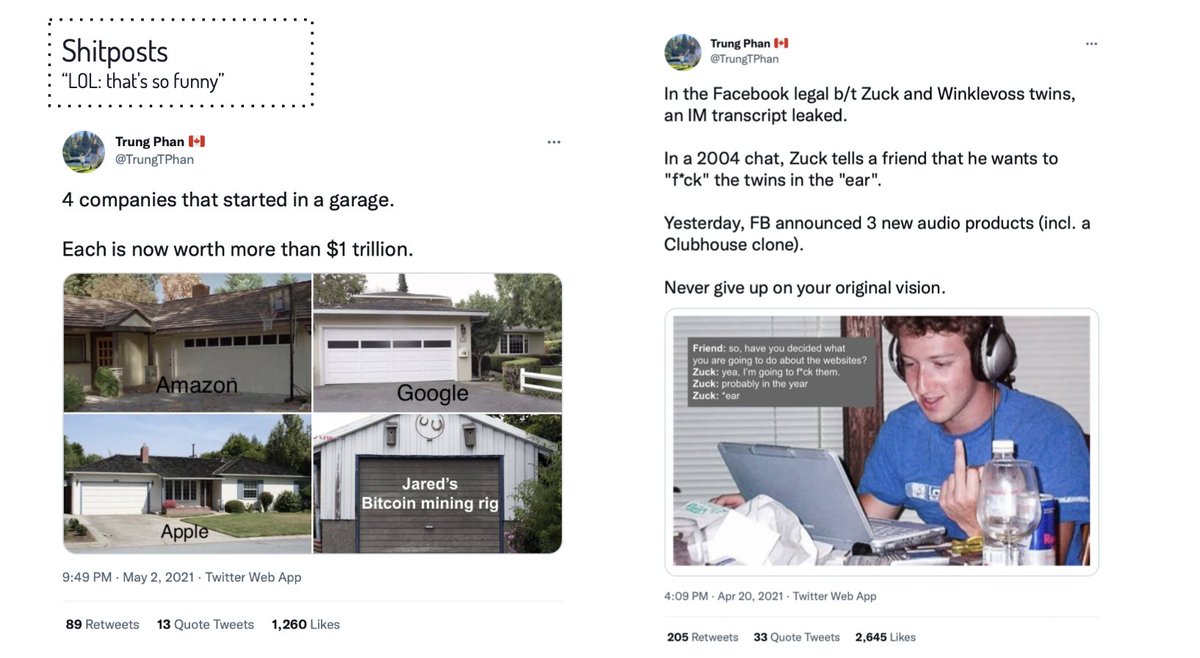 Now on to the next viral emotion!

Trung is very self-aware and likes to make fun of himself.

He often turns little observations into relatable memes that prompt his audience to think: “HAHA, so true” 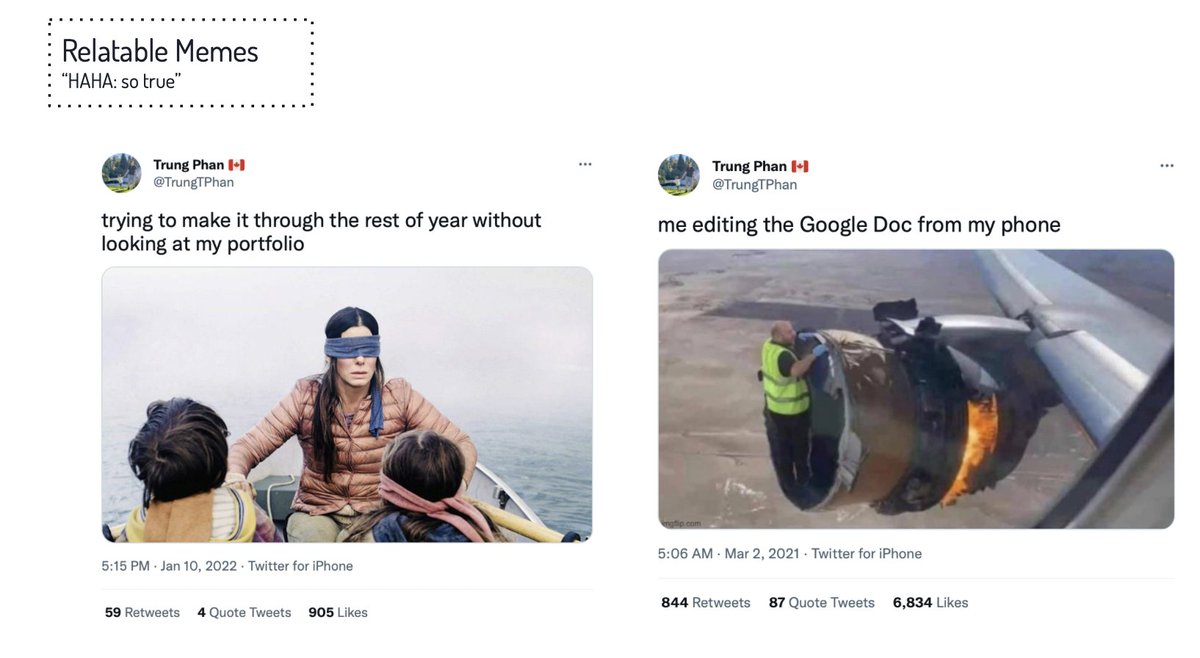 A different way how he targets the same reaction is by summarizing common sentiments about industries and trends in the form of memes. 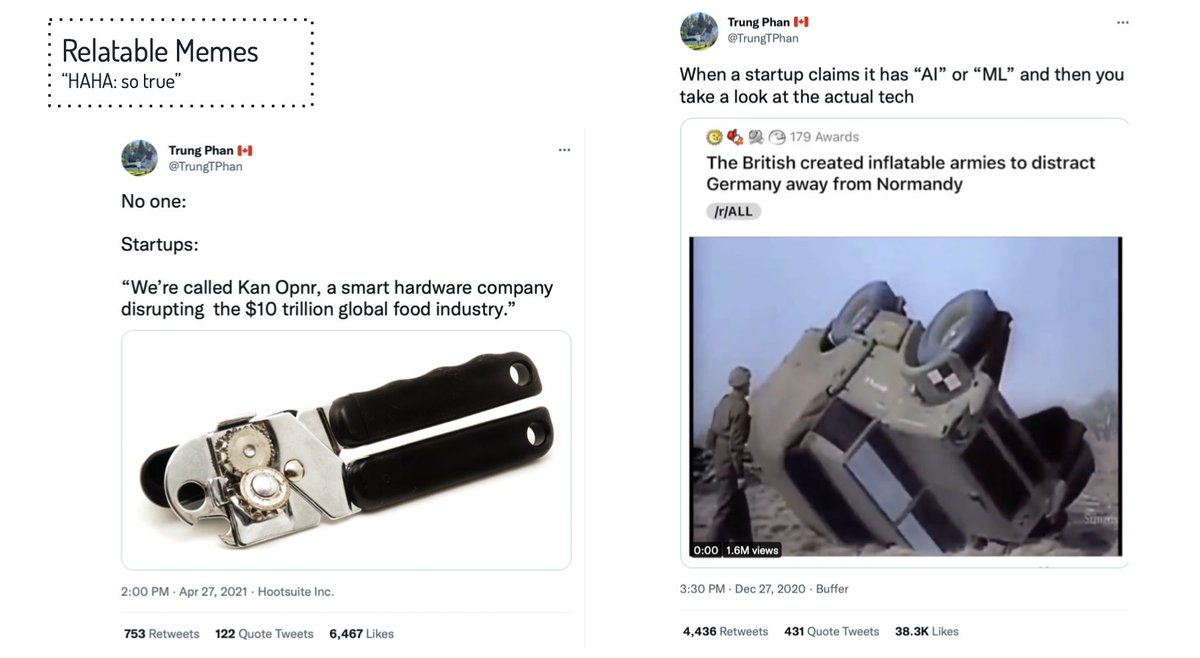 Another thing Trung is very good at is noticing when some piece of content on the internet makes him think “WOW, that’s amazing”, and then repost it on Twitter.

If it sparks this emotion in him, chances are high it’ll have the same effect on his audience. 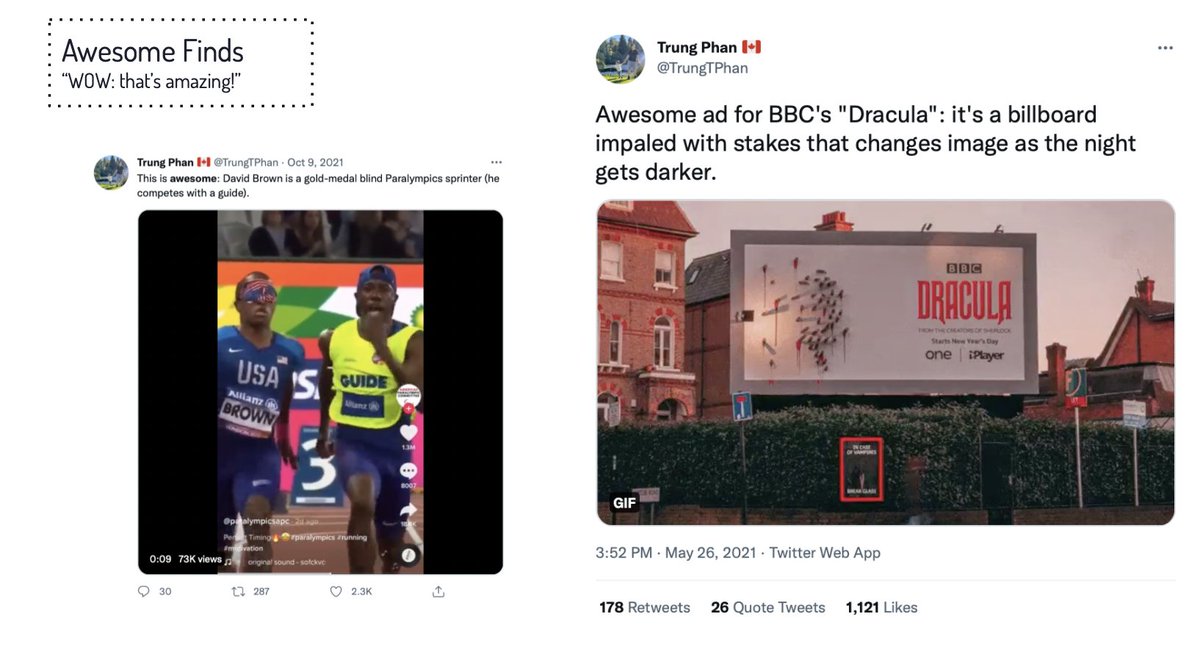 And this brings us to his threads.

He crafts them masterfully to get his audience to think: “OHH, now I get it”.

Trung takes one specific question (e.g. Why did Blackberry lose? or Why is a Rolls Royce so expensive?) and then answers it in the thread. 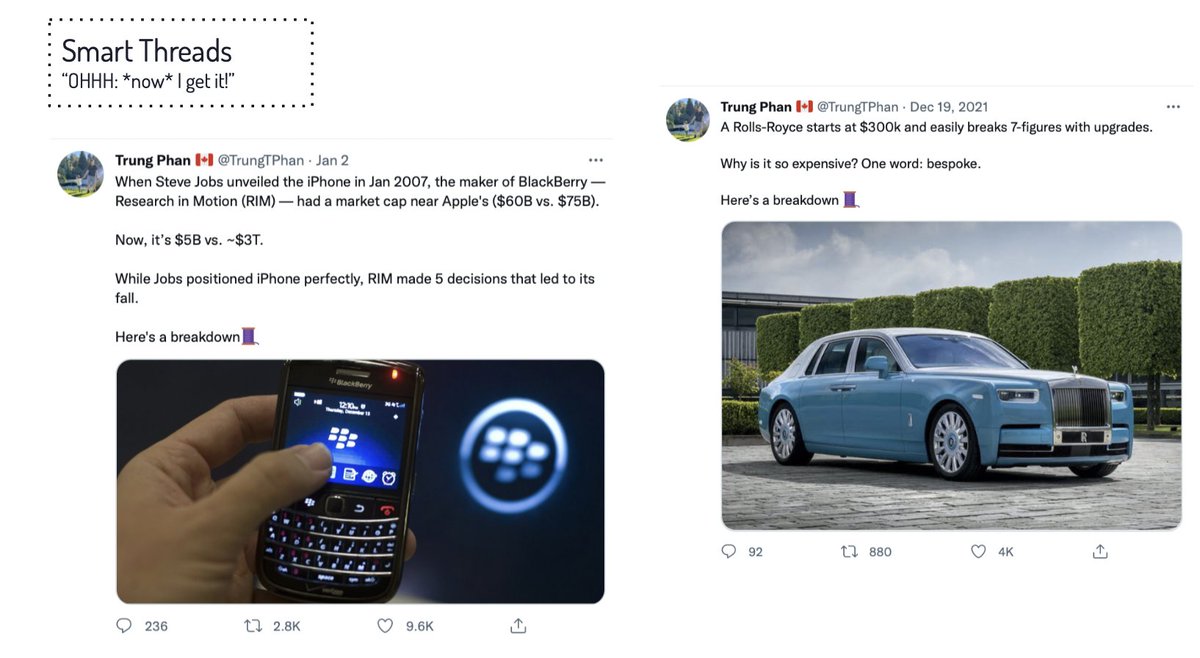 Now that we understand what he does, it’s time to talk about how he does it.

First of all, it’s important to note that he consumes a ton of content every day. 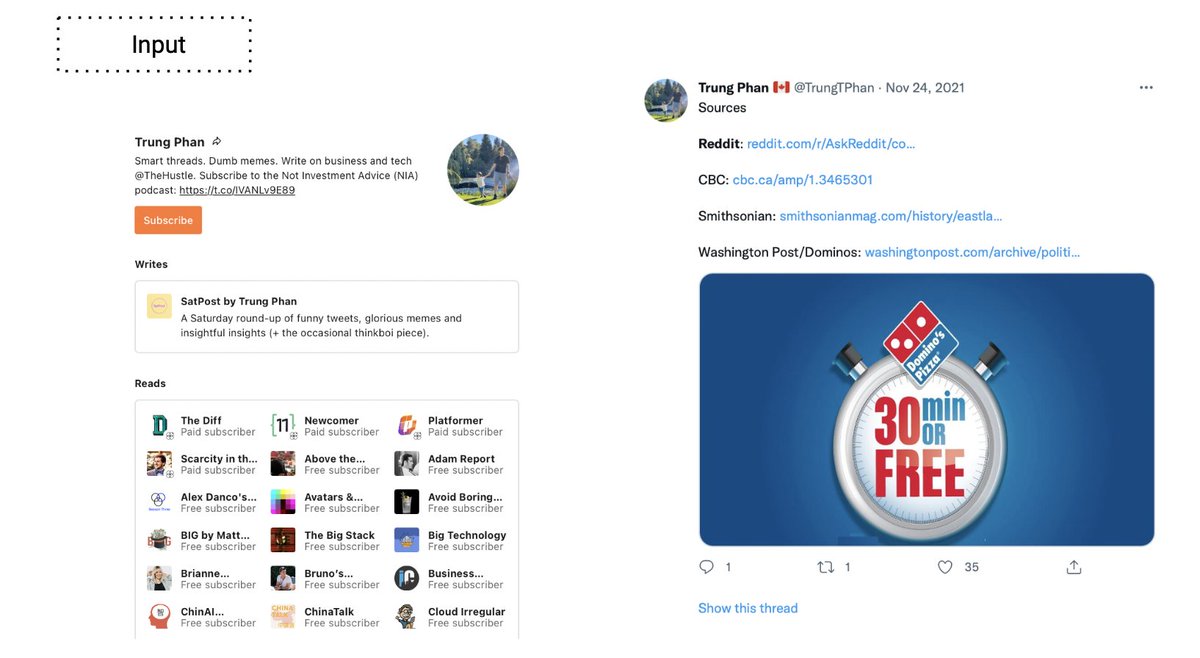 He spends a lot of time in all kinds of subreddits and digs deep through the archives to find interesting content he can repost on Twitter. 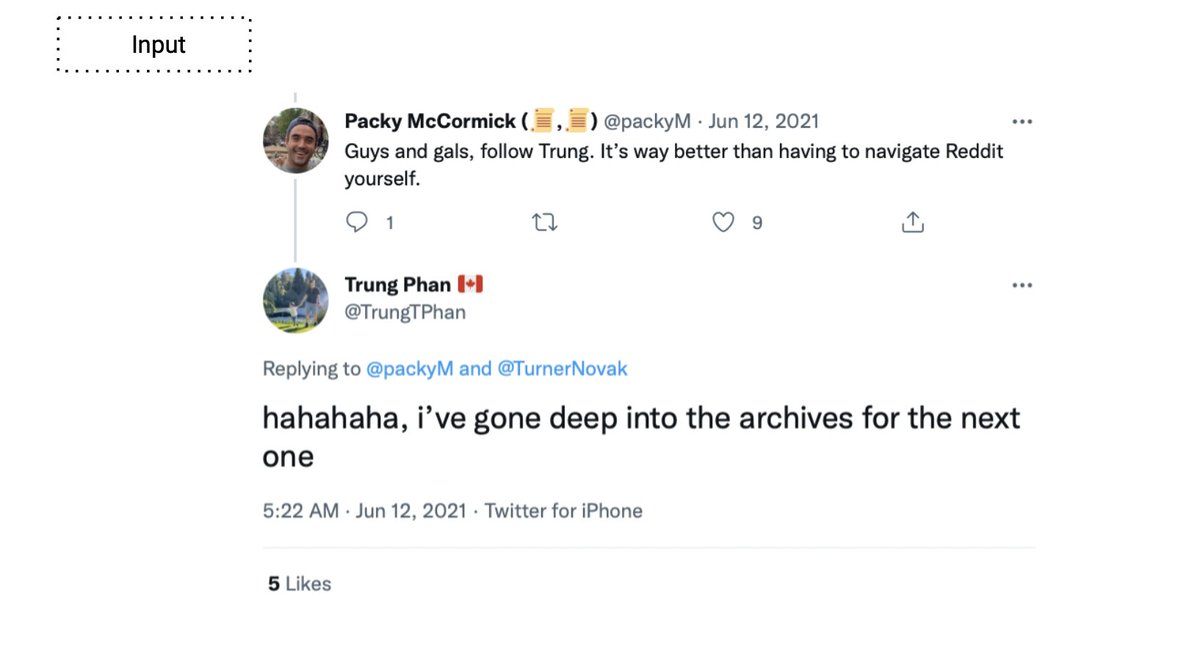 Another key element of his strategy is speed.

He shoots quickly whenever something sparks his interest.

In addition, he replies immediately to most comments on Twitter. This not only boosts engagement numbers but also motivates his audience to write more comments. 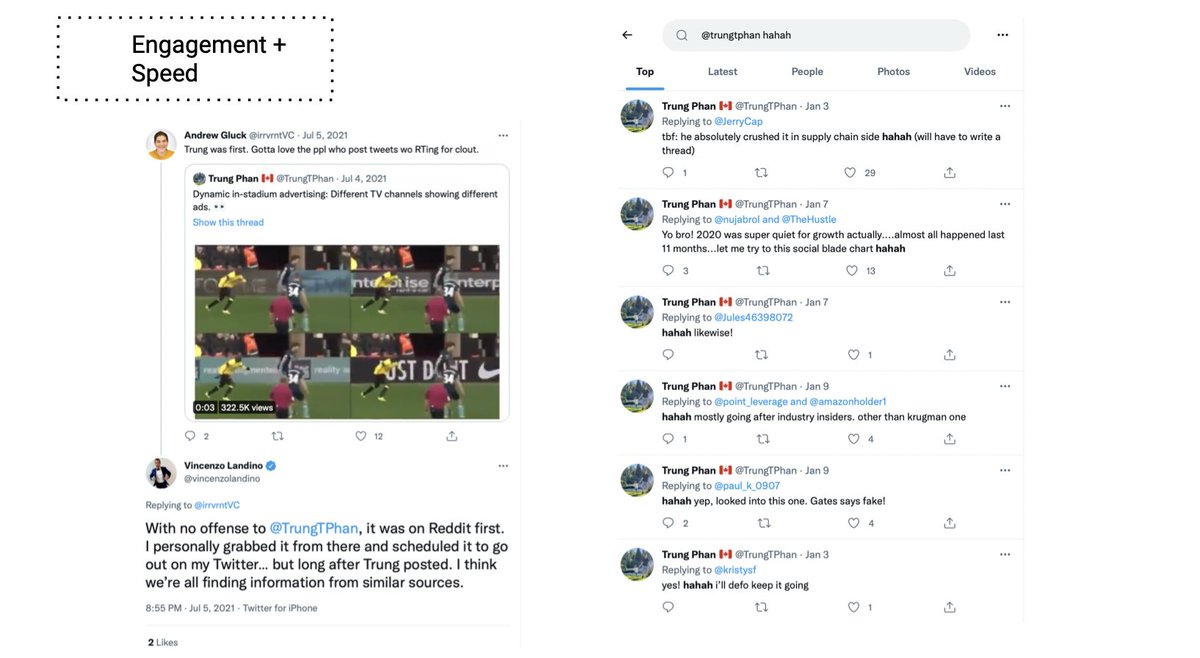 Since speed is such a key element of his strategy, he regularly posts tweets that do not resonate.

But he simply deletes them as soon as he notices this.

This makes sure the majority of his audience never sees the duds. 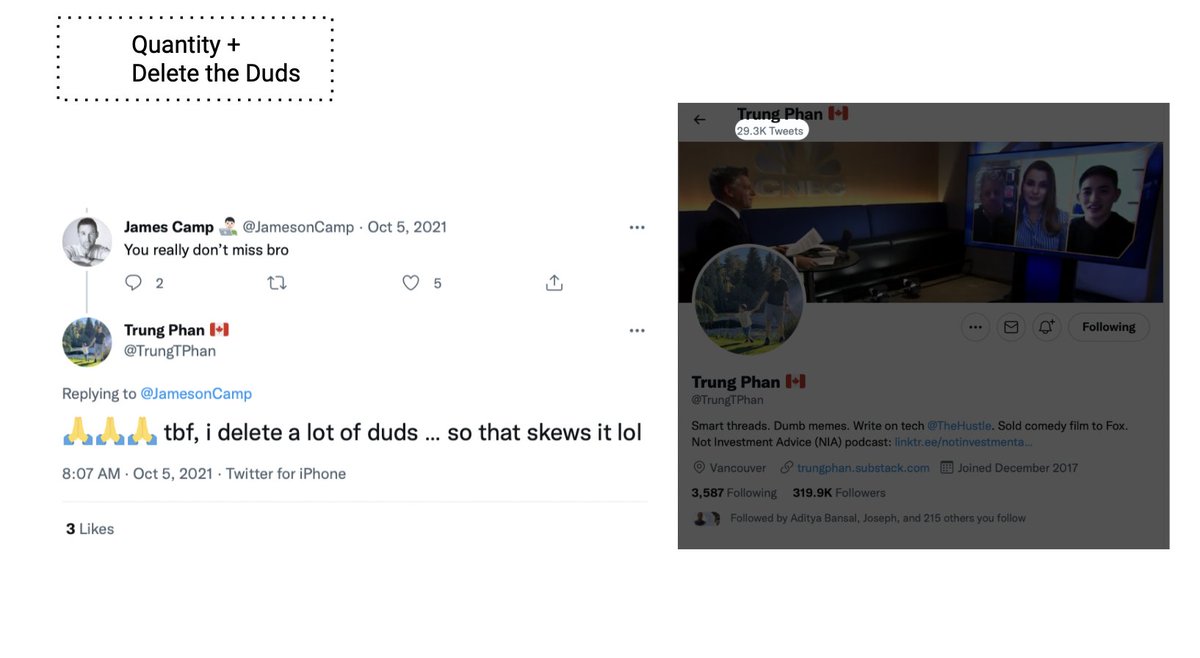 It should now be obvious that Trung’s secret isn’t that he simply reposts a bunch of stuff from Reddit. 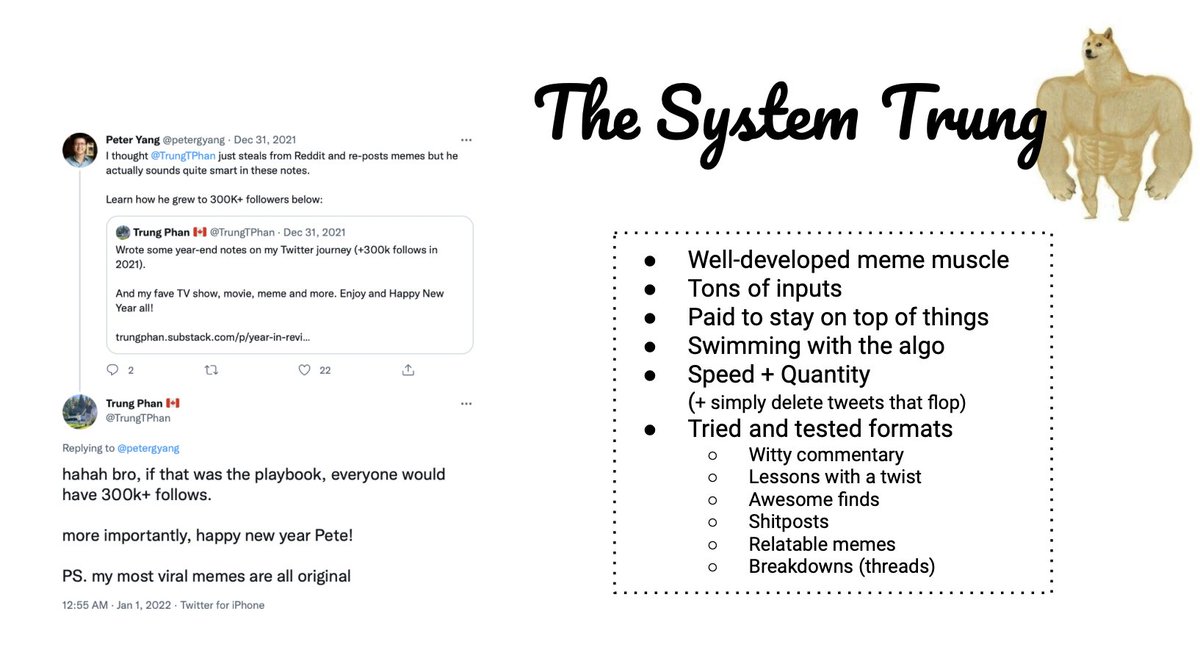